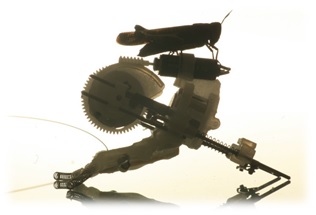 Merging creativity with robust engineering approaches and methodologies is the key to the development of radically new machines and usable systems. Creative engineering design in robotics and biorobotics is a way to bridge research and industrial innovation, to develop acceptable and sustainable robots, and to educate creative students. The area of Creative Engineering Design at the BioRobotics Institute of Scuola Superiore Sant’Anna is focusing on this effort by fostering the virtuous loop smoothly connecting engineering to creativity.

The ingredients on which the area is grounded are three fundamental  elements:

(1) a small team of motivated, creative and competent young researchers with multidisciplinary background;

(2) a number of challenging research projects, which funding framework is often proactively achieved by the team itself by participating with original ideas to competitive international calls;

(3) a set of contacts with companies and focused technical activities targeted at solving real industrial needs.

The level of success of the area is measured by evaluating results on a regular basis, in terms of number of original articles published on international journals, exploited IPR, active Projects, career achievements by former group members.

Past EU Grants and industrial collaborations:

-) CoCoRo: the project aimed at creating a swarm of interacting, cognitive, autonomous robots. The Consortium developed a swarm of autonomous underwater vehicles (AUVs) able to interact with each other and which can balance tasks (interactions between/within swarms).
-) Replicator: the project focused on the development of an advanced robotic system, consisting of a super-large-scale swarm of small autonomous mobile micro-robots that are capable of self-assembling into large artificial organisms.
-) Lampetra: the objective of the project was to develop lamprey/salamander bioinspired artefacts to perform neuroscientific studies related to goal-directed locomotion, and to find new solutions for high-performance artificial locomotion, in terms of fast-response, adaptability, reliability, energy efficiency, and control.
-) Integ-Micro: this project aimed at creating new high precision manufacturing technologies to respond cost-effectively and eco-friendly to the mass customization paradigm within the production of complex shape micro parts, embedded systems and miniaturized products at micro/meso-scale level (from 10 to 10.000 micron range).
-) ANGELS: the aim of the project was to design and build a prototype of a reconfigurable Anguilliform swimming robot able to split into smaller agents (and vice-versa), each equipped with a bio-inspired “electric sense” used both for recognition of objects and communication between agents.

-) BIOMEAR: the objective of the project was to develop of novel micro-manufactured biological and biohybrid prostheses for middle ear surgery. Health Program 2009 - Tuscany Region.